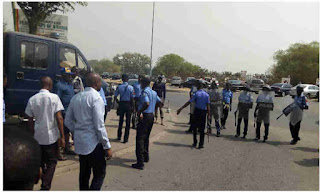 Two Chinese nationals working with Tongyi Construction Company have been kidnapped in Ebonyi state. Sun Zhixin and Wang Quing Hu were working on a road project in Ohaozara area of Ebonyi when they were abducted on Wednesday.

According to reports, the Chinese nationals were in a ditch at a place called Ivo River when the gunmen invaded the place with arms, forced the workers out of the pit and took them to an unknown place.
She said, “The State Commissioner of Police, Awoshola Awotinde on receiving information of the kidnap personally led a tactical team to the construction site, owned by Tongyi group of companies located at Ivo river at the boundary between Ebonyi and Enugu state, where Sun Zhixin and Wang Quing Hu both male, Chinese nationals were forcefully taken away.
“The area was combed to track down the bandits but no result, a track down rescue team has been dispatched to move on in other to rescue the Chinese nationals unhurt.”
0 5
Share FacebookTwitterGoogle+ReddItWhatsAppPinterestEmail