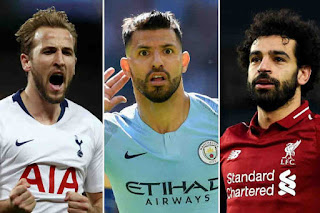 The English Premier League (EPL) title race is not the only one that must be decided in the final weeks of the 2018/19 season, as the incredibly tight top scorer (Golden Boot) race for the league’s top scorer also nears its end.

Leicester City striker ​Jamie Vardy has emerged as a very late contender for the 2018/19 Golden Boot after a recent run of eight goals in his last eight Premier League games. If he can continue that form in what is now left of the campaign under new boss, Brendan Rodgers, he’ll definitely be in the race.
Vardy’s personal best goal tally in a top-flight season remains the 24 he bagged during ​Leicester’s fairytale title-winning campaign in 2015/16. Also, he hit the 20-goal mark last season but is yet to finish as top scorer at this division.
Remaining Fixtures:
Newcastle (H)
Related Posts

A late flurry could push Manchester City winger Raheem Sterling into late contention to win the Golden Boot, and his club would certainly welcome it as they fight stiffly with Liverpool for the Premier League title.
​Sterling is just three goals shy of matching his Premier League tally of 18 from last term. Also, he will take great confidence from a first England hat-trick during the international break, followed by a mature performance in horrendous circumstances in Montenegro.
Remaining Fixtures:
Crystal Palace (A)
Tottenham (H)
Manchester United (A)
Burnley (A)
Leicester (H)
Brighton (A)

Sadio Mane is well and truly taking off after scoring nine times in his last 11 Premier League appearances alone. His goals have continued to push Liverpool towards a first league title in 29 years, although he has not actually scored in either of his last two outings.
​Mane has already bettered his best ever previous goal tally in a single league season. That was the 16 he scored for former club Red Bull Salzburg in the Austrian Bundesliga back in 2013/14, which was actually his debut season of top-flight football.
Remaining Fixtures:
Chelsea (H)
Cardiff (A)
Huddersfield (H)
Newcastle (A)
Wolves (H)

Tottenham talisman Harry Kane managed his best ever Premier League goal tally last season after scoring 30 times. But he did not win the Golden Boot after being outgunned by Mohamed Salah in an enthralling top scorer battle 12 months ago.
However, Kane’s chances take a huge hit when an ankle injury struck during the first leg of the Champions League quarter-final against Manchester City recently. He already missed four games with similar trouble in January and February and his season is at risk of being over.
Remaining Fixtures:
Huddersfield (H)
Manchester City (A)
Brighton (H)
West Ham (H)
Bournemouth (A)
Everton (H)

Pierre-Emerick Aubameyang has been in blistering form in front of goal ever since trading Borussia Dortmund for Arsenal in what was a club record transfer for the Gunners last January, netting 27 Premier League goals in total in his first 15 months.
As many as 17 of those have been scored this season, putting the Gabonese international in Golden Boot contention. He was the Bundesliga’s top scorer in 2016/17 when he scored 31 times for Dortmund and beat Robert Lewandowski to the honour.
Remaining Fixtures:
Watford (A)
Crystal Palace (H)
Wolves (A)
Leicester (A)
Brighton (H)
Burnley (A)

Liverpool hero Salah is fighting to become only the fifth player in Premier League history to successfully retain the Golden Boot (sixth if Michael Owen sharing the award with other players in both 1997/98 and 1998/99 is counted).
Barring a miracle, Anfield’s Egyptian King won’t match the 32 goals he scored to win it last season. Moreover, he will need to capitalise on his recent goal against Southampton after scoring only once in his previous nine Premier League appearances.
Remaining Fixtures:
Chelsea (H)
Cardiff (A)
Huddersfield (H)
Newcastle (A)
Wolves (H)

Two hat-tricks in February saw Sergio Aguero, already Manchester City’s all-time leading goalscorer, leap to the fore in this season’s Golden Boot race. Remarkably, those trebles and another in August means his 19 goals have been spread over relatively few games.
Aguero has scored at least 20 Premier League goals in each of the last four seasons and looks certain to reach that milestone again as his team battle for the title. Also, he already has a Golden Boot to his name after finishing top of the goalscorer chart in 2014/15.
Remaining Fixtures:
Crystal Palace (A)
Tottenham (H)
Manchester United (A)
Burnley (A)
Leicester (H)
Brighton (A)
0 2
Share FacebookTwitterGoogle+ReddItWhatsAppPinterestEmail