See photos of Naira Marley, Zlatan and others being paraded by the EFCC. 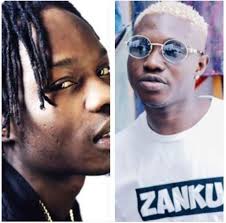 Naira Marley and Zlatan photos were shared on the official Instagram page of the Economic and Financial Crime Commission on Friday, May 10, 2019. The photo was captioned with a statement by the crimes commission.
“Naira Marley, Four Others Quizzed by EFCC over Internet Fraud. The Economic and Financial Crimes Commission, EFCC, Lagos Zonal office, arrested two fast-rising Nigerian musicians – Afeez Fashola (aka Naira Marley) and Omoniyi Temidayo Raphael (aka Zlatan), in connection with an alleged case of internet fraud and money laundering. Intelligence report had also linked them to cybercrime offenses. They were arrested along with: Tiamiu Abdulrahman Kayode, Adewunmi Adeyanju Moses, and Abubakar Musa.
“Their arrest followed an early morning raid on Friday, May 10, 2019, at 9, Gbangbola Street, Ikate, Lekki, Lagos. At the point of arrest, the Commission found and recovered a number of items, including laptops, from the suspects. They have so far volunteered useful information about their involvement in the alleged criminal activities, even as investigations continue,” the statement reads.
Related Posts 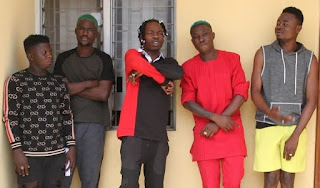 The news of Naira Marley’s arrest broke the internet in the early hours of Friday May 10, 2019. Their arrest have been confirmed by the spokesman of the crime commission.