Prince Harry and Meghan Markle have for the first time shared a photo of their newborn baby. 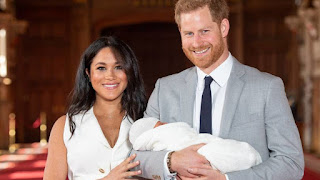 The British couple introduced Baby Sussex to the world via a photocall at Windsor Castle on May 8, 2019. According to British Vogue, during the brief interview, in which they chose not to share the name of their first born, Meghan said: “It’s magic, it’s pretty amazing, and I have the two best guys in the world, so I’m really happy.”

The new mother, who wore a white tuxedo dress by Grace Wales Bonner and Manolo Blahnik heels for the occasion, added, “He has the sweetest temperament. He is really calm. He’s just been the dream so it’s been a special couple of days.”
Recall that the British couple welcomed their first child a few days ago 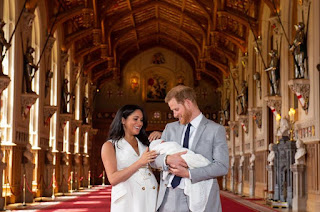 The mother and child were both in perfect condition. Prince Harry and Meghan Markle got married in 2018 in a star-studded wedding held in England. The news of the couple expecting their first child first broke in 2018 during their visit to Australia and the world was pretty excited about the news.