See how Liverpool missed the chance they had with Man city

By Bivmedia Admin On Mar 4, 2019
0 4
Share FacebookTwitterGoogle+ReddItWhatsAppPinterestEmail
The hosts started the game sharply, but it was Jurgen Klopp’s men who had the best chances of the match.
The result means Liverpool now occupy the second spot with 70 points, one behind Manchester City, who defeated Bournemouth 1-0 on Saturday.
Related Posts 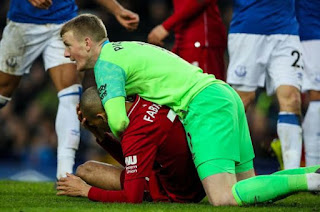 Liverpool missed the opportunity to leapfrog Manchester City into first place in the Premier League table, as they were held to a 0-0 draw by Everton in the Merseyside derby in Sunday.
0 4
Share FacebookTwitterGoogle+ReddItWhatsAppPinterestEmail

Tonto Dikeh reveals how broke she was in the past