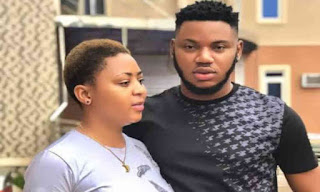 Regina Daniels ex-boyfriend, Somadina, has reacted to the reported marriage of his ex-girlfriend to a billionaire husband, Ned Nwoko.

The duo was once an ‘item’ that they hardly posted photos without each other featuring on social media
In this vein, fans have been seeking to know about Soma, who didn’t flinch over the rumours that the actress is Ned Nwoko’s 5th wife.
Some trolls have taken to Soma’s page to mock him over the lost opportunity he had with the beautiful actress. In his reaction, Regina Daniels’ ex-boyfriend took his time to lash at the trolls and asked them to mind their businesses.
He wrote, “Some people are funny tho, they be coming to say trash to me, even niggas coming on another niggas page to troll him, like who the f…k sits around doing fine boy, like their stupidity wont let em see that a nigga is actually doing great… bitch ass niggas coming to troll their papa, posting shits all over social media upon wetin they know nothing about, upon wetin no be their business… everybody now has an opinion… stupid mofos . . . . choke on this”
Related Posts