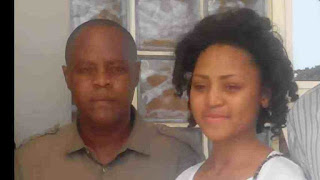 Jude Ojeogwu has claimed to be the father of Nollywood actress, Regina Daniels who is married to billionaire Ned Nwoko. Jide Ojeogwu says he has not approved their union as the marriage ceremony does not have his consent.
Mr Ojeogwu, who narrated how the nollywood actress was named after his late mother “Regina”, stressed that Regina Daniels’ mother, Rita Daniel was going on a dangerous path, advising her to retrace her steps.
His words: “Regina daniel Ojeogwu is my biological daughter. Whatever is ongoing is not to my knowledge and without my consent. It’s obvious by looking at the picture.
“Her mother Rita daniel is going  on a dangerous path and I hope she will retrace her steps. Even the initiation ceremony into Otu Odu appears totally strange to Regina daniel Ojeogwu.
“Regina is from Ogwashi Uku and not from Olor as rumoured. All the opportunities for Mr Ned Nwoko to discuss with me was not successful not realising that we once lived in the same house in Awoyokun street, Onikpan, Lagos.
“The implication of all this is that she impregnated herself. The name Regina was my late mother’s name.
“I have tried to exercise restraint but Regina mother kept pushing me to wall.
Related Posts

Apr 9, 2020
“Am alive and not dead. If in doubt of this post call Barrister Jude Ojeogwu on 08033039058,” Ojeogwu wrote on Facebook.
Also in an interview, he disclosed himself and the husband of his daughter grew up in the same compound as young boys, adding that the barrister is 62-years-old and not 59-years-old.
Ojeogwu said his daughter will be turning 18 in October 2019, explaining that the reason the mother of his daughter has made herself the sole decision maker is because of greed and the fact that her bride price could not be paid due to the fact that her paternal family could not be traced.
He also stated that despite not paying Rita Daniel’s bride price, he has been very responsible for the financial support of all his 4 kids and that the 2 boys lived with him until recently when the mother advised they move in with her into her new home.
See Video Here:
0 5
Share FacebookTwitterGoogle+ReddItWhatsAppPinterestEmail

Nollywood Actor, Uche Maduagwu Reveals How Many Actresses Beg Him For Sex And How He Slept With Them