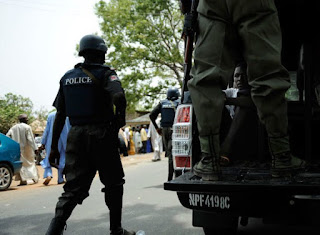 Members of the Hunters Association of Nigeria in Adamawa State stormed the streets of the state capital, Yola, on Tuesday, protesting the death of a member beaten by policemen.
The hunters said that the deceased, Awal Babaiyali, was taken away for questioning by the police allegedly over a stolen car, only for the police to kill him without a chance to defend himself.
The hunters, who were armed mostly with sticks and amulets, marched to the police headquarters in central Yola, threatening to burn down the police headquarters and demanding immediate release of the corpse of their colleague for which they said the hospital had asked N150,000.
Related Posts

Apr 9, 2020
A witnesses, who shed further light on the death of Awal Babaiyali, said the suspect was arrested by the police at 1:00 am on Sunday over an alleged car theft which was parked in his house about two months ago, and that he had first been beaten in the course of his arrest on Sunday while his wife and children watched before he was whisked away.
The Adamawa State Police Public Relations Officer, Othman Abubakar, a Superintendent of police, said all the officers who handled the suspect were being investigated. He explained, “We are very much on what happened yesterday (Monday) at the Dougeri Division (of the Nigeria Police) when (someone died in police custody). The person that died was a principal suspect. When the arrest was made and he was being interrogated, along the line it was discovered that he had a disease that was not earlier detected. He died at the hospital where he was taken.
“Immediately, the Adamawa State Commissioner of Police, Audu Madaki, directed the arrest of all those involved in the interrogation and the DPO was directed to report at the police headquarters and another police officer has taken his place. The matter is still under investigation and we are going to make our findings known to the public. We appeal for patience as everything will be done for justice to prevail.”
0 4
Share FacebookTwitterGoogle+ReddItWhatsAppPinterestEmail