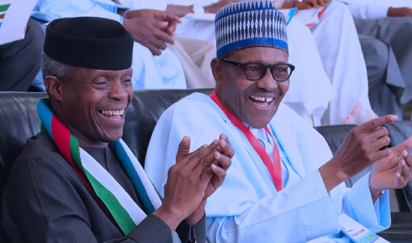 President Muhammadu Buhari Chats with the Vice President Yemi Osinbajo others during the 2018 National Convention of the Party at the Eagle Square in Abuja. The Vice President reiterated the Federal Government’s commitment to completely resolve the perennial blackout in the Southern Senatorial district. Addressing the council of traditional rulers at the palace of the Jegun of Idepe in Okitipupa Local Government Area, Prof. Osinbajo promised that the federal government would do everything possible to restore light in the remaining affected communities.

A WELCOME MESSAGE FROM BAVICMEDIA…..