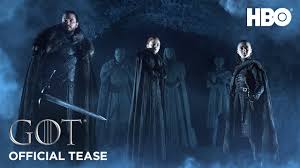 HBO has just released new video clips for their highly anticipated series finale for “Game of Thrones” on YouTube to get people hyped for the release.

Just some hours ago the show dropped off a video going into the show’s visual effects.
“Things need to be shot faster and they need to be turned around faster. This whole journey of Game of Thrones has been one of figuring out how to rise to that occasion,” visual effects producer Steve Kullback said in the clip. “It’s a remarkable demand on our team.”