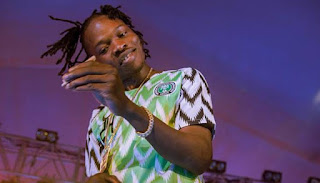 Nigeria rapper Naira Marley took to his Twitter handle on Tuesday to show off his garage, hours after Tinubu Chief Magistrates’ Court in Lagos, ordered that he should be arrested and arraigned over alleged car theft.

It was reported that two of the Marley’s brothers and his cousins appeared in court over alleged theft of a car and a cell phone.
The defendants, Idris Fashola, 18, Babatunde Fashola, 24; and Kunle Obere, 22, are facing a four-count charge bordering on conspiracy, stealing, assault and obstructing the arrest of Naira Marley.
The chief magistrate granted the three defendants N500,000 bail with two sureties in like sum.
He ordered the IPO to produce Naira Marley before the court on Dec. 21, when the case would be listed for further hearing.
Moments after, the “Soapy” crooner displayed his luxurious  cars on the micro-blogging platform, while expressing his displeasure about that.
“I don’t normally do this, I don’t like flexing on people that don’t have but y’all teaching me how to show off… ALHAMDULILLAH SHA,” he wrote.
Among the three cars he displayed are: Mercedez Benz G wagon, a Bentley among other.
Related Posts

Man gets haircut with picture of Kanye West carved on his…

See Video of World’s first gold-plated hotel that was…

I don’t normally do this, I don’t like flexing on people that don’t have but y’all teaching me how to show off. #Alhamdulillah pic.twitter.com/B9rLiyYlKW