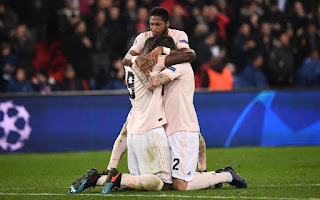 Manchester United are through to the last eight of the Champions League, following their 3-1 win over Paris Saint-Germain.

However, Romelu Lukaku scored within two minutes for united.

PSG levelled after Kylian Mbappe found space in the box to tee up Bernat. But Lukaku ensured that the Red Devils went in on top at the break, reacting quickest to Marcus Rashford’s rebound.
The hosts struggled to put the tie beyond United, who then went on to grab a late winner through Rashford, following the intervention of Video Assistant Referee (VAR).
0 3
Share FacebookTwitterGoogle+ReddItWhatsAppPinterestEmail