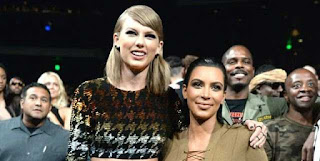 Following Kardashian’s call out that Swift lied and releasing audio evidence to back up the claim, Swift became the subject of online bullying from many social media users who bashed her for painting West to look like the bad guy.
In an article for Elle’s April cover story, the pop princess has shared 30 “lessons” she has learned before the age of 30 and she references her famous feud with Kardashian and how she was able to deal with the pain it caused her.

“It would be nice if we could get an apology from people who bully us, but maybe all I’ll ever get is the satisfaction of knowing I could survive it, and thrive in spite of it,”Swift writes.

Swift also wrote about another life skill she gained in her 20s  in what seemed to be yet another reference to the feud,

“I learned how to make some easy cocktails like Pimm’s cups, Aperol spritzes, Old-Fashioneds, and Mojitos because…2016.”

It would be recalled that Swift struck back at Kardashian and West on her songs,  “Look What You Made Me Do” and “This Is Why We Can’t Have Nice Things” off her “Reputation” album.
Related Posts