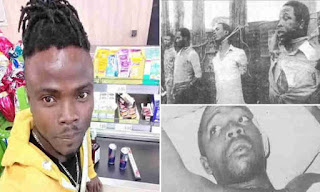 Apr 9, 2020
The son of the notorious armed robber said he was proud of his father even though people point fingers at him everywhere. He added that he will soon come out to tell his own side of the story of ‘Anini’ and addressed the real meaning and pronunciation of the name.
Lawrence Anini terrorised Benin City in the 1980s alongside his sidekick Monday Osunbor. He was captured and executed for his crimes.

See How To Get and Print original JAMB Result

Why I Killed My Wife – Suspect Reveals