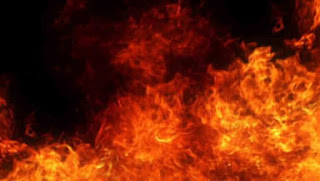 A fire broke out early Saturday at the Coachella music festival in Indio, California, authorities said. There were no reported injuries
The fire, at a mobile shower unit at the Empire Polo Club grounds, was reported at 2:06 a.m. local time, Riverside County Fire Department said.
One trailer was damaged, while a second was destroyed, they said.
How the fire started wasn’t immediately clear, but it was reported that the fire sparked just days after a longtime Coachella worker fell to his death while setting up for the event.
Related Posts

Apr 9, 2020
Concertgoer Lauren Rae Levy, who witnessed the fire, said it brought back painful memories of a recent California wildfire.
“My fiancé, Marcel Vigneron, and I have an RV in the corner area close to where the fire was. It all happened a few minutes after 2 a.m., and the flames got high quickly.
“There are many firefighters around here, thankfully, so they were able to put it out quickly, thank goodness, but what a scare.
“We were evacuated from our home in Malibu in November, so this shook me up, seeing fire so close again. The flames got high,” she said.
Coachella kicked off Friday with Donald Glover, who raps and sings as Childish Gambino, as the headliner of the annual arts and music festival held over two weekends in April.
0 3
Share FacebookTwitterGoogle+ReddItWhatsAppPinterestEmail

BBNaija: Ifu Ennada gives an account on how she made her first million