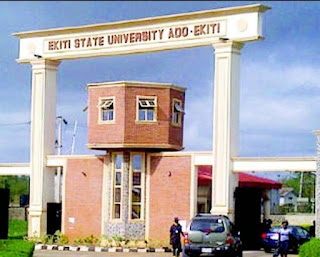 The Management of Ekiti State University, Ado Ekiti has dismissed three of its academic staff members, including Mr. Olola Aduwo, accused of involvement in sex scandal.
The two other workers were dismissed  for  negligence of duty.
Mr. Aduwo, who is a senior lecturer at the Department of Accounting of the institution, was caught in a 29-seconds video clip that went viral on social media allegedly trying to have carnal knowledge of one of his female students.
Related Posts

FG Pays Lecturers Salaries Which Leads to the Aversion on…

Just In: JAMB Fixes date For 2020 UTME Registration and…

May 25, 2019
The committee heard the cases against the lecturer and they strictly followed laid down procedures, giving him a privilege to defend himself.
He further explained that Mr Aduwo admitted to the allegations and confirmed the authenticity of the report of the preliminary panels before which he appeared.
The Governing Council, led by its Chairman, Prof. Bamitale Omole, found the lecturer guilty of all the allegations levelled against him and subsequently ordered his dismissal from the services of the university with effect.
The council also approved the dismissal of two workers of the institution, Mr. Temitope Faleye and Dr. Adebanji Adegoke.
0 9
Share FacebookTwitterGoogle+ReddItWhatsAppPinterestEmail

Cardi B Gift N180million to Offset for his Birthday

Tiwa Savage Falls During Her Performance on Stage (Video)

Just In: JAMB Fixes date For 2020 UTME Registration and Examination