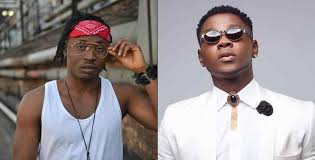 Recall that the Demmie Vee who had a management deal with Fly Boy Inc (FBI), openly called out Kizz Daniel and accused him of being a traitor as well as cunningly collecting the sum of N15m from him

He has however apologised shortly after a video of him prostrating to beg Kizz Daniel surfaced online on Tuesday night.
Related Posts

Apr 9, 2020
“Kizz has always been a good person to me with good heart. Am using this opportunity to let everyone understand that Am truly sorry for everything this whole drama might have caused the whole Flyboi Management/Team. I will forever appreciate what you guys have done for me. From the bottom of my heart. Am saying am sorry. Let’s love lead. And to all upcoming act out there. Always remember patience is a virtue.’
“Kizz Daniel also shared a video on his page in which Demmie Vee was spotted prostrating as he tendered his apologies. But he later removed the video.”