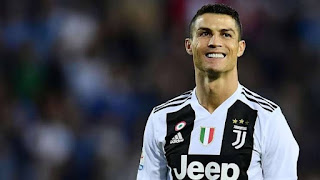 Juventus star Cristiano Ronaldo has received the Marca Leyenda award and said he “hopes to return to Madrid soon”.

The Portuguese superstar won four of his five Ballons d’Or and four Champions Leagues, as well as two La Liga crowns and two Copa del Rey titles, scoring a whopping 450 goals in just 438 games for Real Madrid in his ten years at the club.
Now in Italy after signing for the Bianconeri last summer in search of a new challenge, Ronaldo admits that he misses the Spanish capital and felt sad to leave Los Blancos as he received the prestigious Marca Leyenda award in Madrid.
“I felt sorry when I left Real Madrid,” Ronaldo said at the awards ceremony.
“I miss both [Manchester and Madrid] but because of life’s circumstances I have lived more years in Madrid, my children and my girl were born here, so I miss Madrid more.
“This trophy will be in a very nice place in my museum. Madrid is special, I travel a lot but there are few cities like Madrid. Much of this award is derived from what I did in Madrid. It is a Spanish trophy and leaves me very honoured. Thanks to all those who have helped me to achieve it. It is a pride for me. And I hope to return to Madrid soon.”
Ronaldo also opened up on his ambitions as a child, the title that he treasures most, and his Champions League hopes for the coming season.
“I never thought about [reaching this level]. My dream was always [just] to be a professional player.
“All titles are important but possibly [the 2016 European Championship] because it is special. It is not the same, when you win something for your country and you know that it is more difficult, it is the most important thing in my career.”
“I don’t know [if I will win the Champions League this year with Juventus]. We will try, as always. Hopefully Juventus wins.”
https://www.passtechusa.com/z8evrhjs4?key=207a3828dcbc5f7aa0bc8516dc976062
0 7
Share FacebookTwitterGoogle+ReddItWhatsAppPinterestEmail