Chelsea boss, Maurizio Sarri said he needs consistency from his side 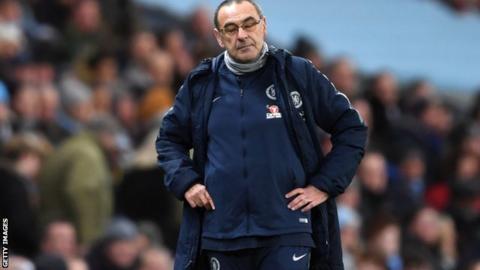 Chelsea boss Maurizio Sarri says he is looking for some consistency from his side after they claimed a 2-1 victory in Malmo in the first leg of their Europa League last 32 tie.
It followed their 6-0 defeat against Manchester City in the Premier League on Sunday.
“In the last period we’ve had the problem of up and down, up and down,” said Sarri.
“4-0, 5-0 to us, 6-0… so we need to have continuity and consistency.
Chelsea had lost four of their previous 10 games going into Thursday’s match, being beaten 4-0 at Bournemouth in the Premier League on 30 January and 2-0 at Arsenal 11 days earlier.
Sarri said Chelsea needed to “approach every match with the same level of application, determination and attention”.
Related Posts

Apr 9, 2020
Ross Barkley and Olivier Giroud scored for Chelsea in Sweden, with Anders Christiansen pulling one back for Malmo in the 80th minute.
The second leg is at Stamford Bridge on 21 February.
“I am happy because we played with a very good level of confidence,” Sarri said.
“It wasn’t really very easy after the last match. But today we were confident because we moved the ball also inside our box.
“So I think we played very well. We risked only on set-pieces, because they are more physical than us. We could have scored more, I think. But we conceded a goal on a mistake. Today, the level of application and attention was good. We made a mistake, I think, a material mistake. So it could have been better.
“Better because we had three or four goal opportunities when it was 2-0, so we could have killed the match. But I am happy with the confidence. It wasn’t easy to play with this confidence after the last match.”
0 4
Share FacebookTwitterGoogle+ReddItWhatsAppPinterestEmail

Katty Perry and Orlando Bloom to get married soon

The citizens will must prevail in the election