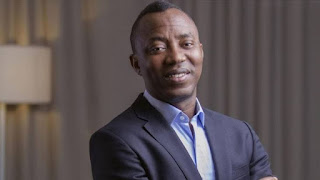 The Department of State Security Service (DSS) in compliance with the court orders directing it to release the convener of #RevolutionNow protest, Omoyele Sowore, from custody.
Omoyele’s release came in few hours after the Attorney-General of the Federation and Minister of Justice, Mr. Abubakar Malami (SAN), said in a statement on Tuesday that he had issued a directive to the DSS to release the Sahara Reporters publisher and the immediate-past National Security Adviser, Sambo Dasuki.
Related Posts

Apr 20, 2020
Malami said his directive followed the decision by the President, Major General Muhammadu Buhari (retd.) regime to comply with the court orders granting the two men bail.
Journalists from various media houses saw Sowore after he was released from the custody of the DSS at the agency’s headquarters in Abuja at about 6.20pm on Tuesday.
0 7
Share FacebookTwitterGoogle+ReddItWhatsAppPinterestEmail

Just In: JAMB Fixes date For 2020 UTME Registration and Examination