BBNaija reunion: Cee-c has disclosed why she engaged in so many fights with Tobi 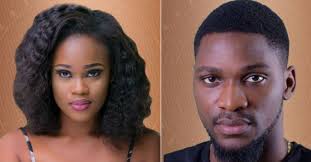 While speaking to Ebuka at the “DoubleWahalaReloaded,” Cee-c said she fought with Tobi a lot because she was jealous and always wanted him to herself.
She said, “Yea I fought a lot of time with Tobi because I wanted him to myself but he is a socialite and he also wanted to mix with everyone.
Related Posts

Apr 9, 2020
“I was really jealous but the viewers were not easy on us following fights we had.”
On why her relationship with Tobi did not work out, Cee-C said that they were not compatible.
“I did everything I had to do to get us together but we were not meant together,” she added.
0 3
Share FacebookTwitterGoogle+ReddItWhatsAppPinterestEmail