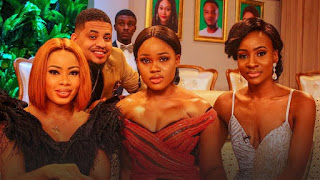 Here are all the main details that you might have missed at Big Brother Naija Reunion show Day 5.

1. Cee-c blows the lid on Tobi and Alex,sexual affair
Cee-c calmly reeled out how Alex had sex with Tobi while in South Africa and he kept telling her that they were just besties. Cee-c told Ebuka that she was astonished because Tobi kept on denying his affair with Tobi all through their stay in the house. She also said she laughed hard when she heard about Tobi’s sexcapades with Alex.
2. Alex broken uncontrollably
Day 5 of the Big Brother Naija Reunion show Day had Alex breaking down uncontrollably. The 24-year-old couldn’t fight the tears as they rolled down uncontrollably when Cee-c revealed her affair with Tobi. She got more devastated to find out that those she referred to as her friends all spoke about her behind her. A visibly angry Alex left the session to have a quiet time for herself and when the camera followed her, she threatened to break the camera.
3. Nina is the harbinger of romance news
Nina has been revealed as the source of the news of Alex and Tobi’s sexcapades. Nina confessed to telling Cee-c about Tobi and Alex having sex far away in South Africa. She further clarified herself saying she got the news from her ‘friend,’ Miracle. She said Miracle told her about Alex and Tobi’s romance and sexual escapades.
0 2
Share FacebookTwitterGoogle+ReddItWhatsAppPinterestEmail