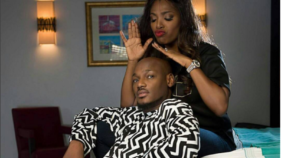 Annie Idibia has revealed  that she does not want to be recognized as just her husband, 2Face Idibia’s wife. The award-winning Nollywood actress disclosed that she would rather be called by her name instead of her identity being attached to her husband’s status.
On her career and how she would love to be addressed, she said,
Related Posts

“I took a break from my career because after I got married, I got pregnant so I had a baby and had to get used to the new life. I think I did not do any movie for about three years. Being addressed as Tubaba’s wife instead of Annie the actress has been a problem that I have been trying to work on for a long time.
I want to believe that I have successfully been able to identify and differentiate my brand as Annie Idibia the actress/career woman and Annie Idibia the wife/mother. I prefer being addressed as Annie and not Tubaba’s wife. I hate this because I am my own person and have worked hard to build my career and brand. I should be identified and respected on that basis.”

Recall that Annie was one of the video vixens that appeared in 2Face’s classic song, “African Queen”. The duo dated on and off for years with 2Face fathering children from two other women before he finally tied the knot with Annie in 2012. The couple has been going strong ever since and from time to time, display their affection for each other on social media.
Annie once disclosed in a social media post that she would like to die shortly after 2Face dies because she cannot imagine a world without him.
0 5
Share FacebookTwitterGoogle+ReddItWhatsAppPinterestEmail