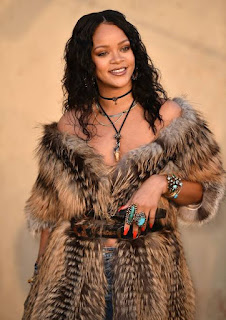 Apart from , Rihanna’s upcoming album, fans now have something else to look forward to, as Amazon has now purchased  a documentary about the Barbadian R&B star for a whopping $25 million.
The upcoming documentary which has been in the works for years, talks about the singer’s life and is directed by Peter Berg.
Related Posts

Mar 26, 2020
According to The Hollywood Reporters, the project is an “unfiltered look into Rihanna’s life, providing a glimpse into the evolution of one of the world’s most renown artist pops. With unparalleled access into the singer’s life and more than 1,200 hours of footage, the doc offers private insights into Rihanna’s personality, sense of humor, work ethic, family and love.”
“I think she’s an extraordinary young woman and it really is kind of a pretty detailed profile of what goes into making her this talent that she is,” Berg told Slash Film last year. “The work ethic, the talent, luck, the hustle, the vision.”
Meanwhile, Rihanna isn’t the only star to see a big payday for a documentary about her life.
Just last week, Apple TV+ bought the rights to a Billie Eilish doc for $25 million.
https://www.passtechusa.com/z8evrhjs4?key=207a3828dcbc5f7aa0bc8516dc976062
0 6
Share FacebookTwitterGoogle+ReddItWhatsAppPinterestEmail