Adesua Etomi, Nollywood actress disclosed what she does when she is about give up 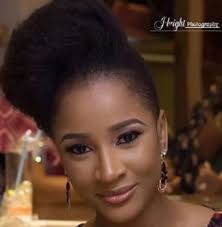 She wrote, “Just when I’m about to give up, I read about the most inspirational human beings and my faith in humanity is restored. There is hope.”
Adesua Etomi was nominated in the ‘Favorite African Star’ category for the Nickelodeon 2019 Kids Choice Awards.
Related Posts

Apr 9, 2020
The Nickelodeon Kids’ Choice Awards is an American Annual Awards show produced by Nickelodeon.
The awards ceremony will be held at the Galen Centre in Los Angeles, California on the 23rd of March with DJ Khaled who was nominated for Favourite Male Artist playing.
Davido was also nominated for the Favourite Global Music Star category alongside Taylor Swift and David Guetta while both host.
0 2
Share FacebookTwitterGoogle+ReddItWhatsAppPinterestEmail

Champions league: Check out clubs that qualified for quarter finals

Popular Singer, Davido to perform at the roots picnic