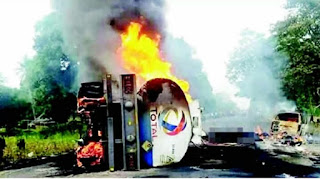 The tanker exploded in Ahumbe village along Aliade road in the Gwer East Local Government Area of the state while heading towards Makurdi, the state capital of Benue State

Apr 9, 2020
The Federal Fire Service said its men responded to the accident at 04:17 pm and were able to contain the fire and stop it from further explosion and destruction.
Dozens of people were also injured in the accident and 50 people were reported dead after the explosion
The Benue State Police Command reported that many villagers had ignored warnings and swarmed the tanker to scoop fuel after it fell, just before the explosion.The Fire Service said its officers at the scene have commenced search and rescue with victims taken to the hospital for medical attention.
0 9
Share FacebookTwitterGoogle+ReddItWhatsAppPinterestEmail

BBNaija 2019: Nelson Emerges Winner of Endurance Challenge in the House