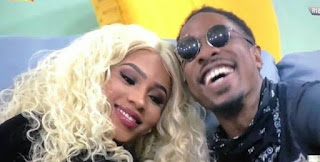 BB Naija 2019 lovers Mercy Eke and Ike Onyema seem to have had a traditional wedding, according to a video shared on Instagram by fellow  ‘Pepper Dem’ housemate Omashola.

The announcement of the low-key ‘traditional wedding’ by Omashola came as a surprise to their fans who could not hide their joy, as they stormed the comments section to send in their congratulatory messages.
In a video shared, the duo were gorgeously dressed in their traditional attire, as Ike maintained that he is now a married man.
Recall that during their stay in the Big Brother House, Ike’s sister, Cindy approved his in-house relationship with the  video vixen, who emerged winner of the reality show.
Their love has been growing stronger by the day and Mercy earlier stated that she would love to be with Ike after the end of the reality show, but wanted to slow it down because she had been through a lot in her past relationships.

Topless women troop out as they perform sacrifices to fight…

Topless women troop out as they perform sacrifices to fight coronavirus in Abeokuta,…