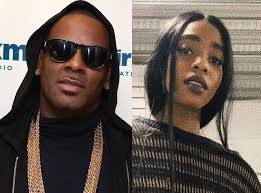 The music icon took to his Instagram page on Wednesday, March 20, 2019, where he shared a video of himself singing a popular birthday song for his baby girl.

No doubt, R.Kelly has one of the most unique and outstanding voices and it didn’t take him anything to show off some of his singing skills as he celebrates his daughter on her birthday. However, at the end of the song, he went to profess his undying love for his daughter.
“Happy birthday darling, I love you, no matter what, Daddy loves you so much,” he said. It’s no longer news that R.Kelly is battling to keep his legacies after he was accused of sexual abuse and rape by several women.
In a recent post, his daughter, Joan Lee Kelly joined the list of people who have dragged him over his alleged crimes. Surprisingly, Joan who took to her Instagram page and called R.Kelly a monster.
“The same monster you are confronting me with is my father,” – R.Kelly’s daughter speaks out